At the peak the public swedish railways covered a total of 16 886 km. A fairly high share of railway lines built in Sweden between 1870 and 1920 were narrow gauge lines, mostly with three foot gauge.

In total over the years 18 064 km railway was built in Sweden, of which about 24 % was narrow gauge of as much as nine different gauges.


With Steam and Electricity

On the tracks of the swedish narrow gauge you find a great variation of rolling stock....
Quite early attempts were made to change from steam to electric operation. The first railway to try was Djursholmsbanan, DjB, later a part of Stockholm-Roslagens Järnvägar, SRJ. DjB started to operate from Stockholm to the suburb of Djursholm already in 1895, using 600 V DC to run its electric trains. Later the electric overhead wire was expanded to cover a big portion of the SRJ network. Other narrow gauge railways to operate electric trains were Mellersta Östergötlands Järnväg, MÖJ, using 10 000V, 25 Hz AC and Nordmark-Klarälvens Järnväg, NKlJ, using 16 000V 25 Hz AC.


SJ is Taking Over

All the narrow gauge lines were built by public companies with ownership widely spread among the public and the communities along the lines. However, in 1939 a law was passed in Sweden requiring all railways to be nationalized. The Swedish State Railways, SJ, started to acquire the first narrow gauge railways in 1940, but only bought those with 891 mm, 1067 mm and 1093 mm gauge. (Actually they already had acquired a few prior to the new law, but this was only to save these lines from bankruptcy).  Eventually, in 1954, all 891 mm narrow gauge railways but three had been nationalized. The three remaining were Nordmark-Klarälvens Järnväg, NKlJ, Byvalla-Långshyttans Järnväg, BLJ, and Dala-Ockelbo-Norrsundets Järnväg, DONJ, all three with strong industries as owners. 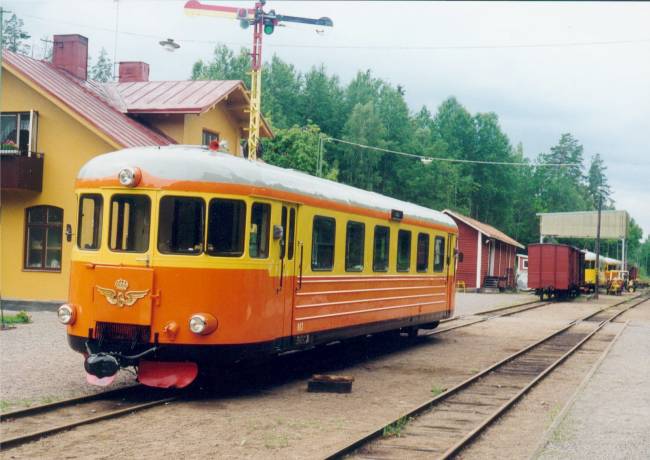 SJ had a couple of good years with lots of traffic during the second world war, but after 1945 traffic on the narrow gauge dropped quickly. The rolling stock was also quite worn and in bad need for repair or replacement. SJ started to invest in some rolling stock, including diesel motorized railcars and small diesel locomotives. Even a few new steam engines were built for the 891 and 1067 mm tracks.


Railcars like this Yp DMU in Verkebäck were used all over the narrow gauge tracks of SJ in the 50-ies to the 80-ies. Photo and © Per Nilsson.

Today the only narrow gauge line still in daily service is "Roslagsbanan". A few of the railways have also survived as preserved lines, such as Upsala-Lenna Jernväg, ULJ.