Welcome to the Model Railway Club 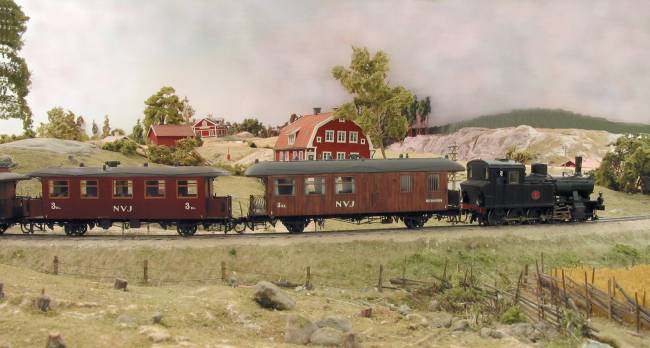 A passenger train headed by NVJ # 5 is picking up speed just north of Stabby. Photo and © Jörgen Bergfors.

The Model Railway Club Trefoten is a narrow gauge model railway club in Stockholm, Sweden, building a swedish narrow gauge railway in scale 1:87 on H0s3 track. H0s3, with the model gauge 10.25 mm, is a finer / more accurate version of H0n3, better representing the swedish three foot gauge of 891 mm. (The swedish foot is a bit shorter than the imperial foot). Tre fot in swedish means three foot, thus our name is Trefoten!

Trefoten is recreating a small three foot (891 mm) gauge railway line about 1950. We are following the prototype of Norrtälje-Väddö Järnväg, NVJ, a planned but never built railway extending the "Roslagsbanan" (Stockholm - Roslagens Järnvägar, SRJ) from Norrtälje to Elmsta and Väddö in the province of Roslagen, north of Stockholm. NVJ should have carried passengers and freight (mainly timber and agricultural products) to SRJ in the town of Norrtälje over a 28 km long line from Elmsta by Väddö channel.

Trefoten tries to portrait this little private railway as it could have been a day in August / September of 1950. This opens many opportunities to paint an ideal picture, but also includes some dirty realism in the form of a junk yard or an ugly modern building in "funkis" style.

By choosing a prototype such as NVJ we create a good mix of fantasy and reality. We are recreating the landscape and several scenes from the province of Roslagen including authentic buildings, and at the same time as we can choose any prototype rolling stock from any of the three foot gauge railways in Sweden.

We emphasize the aspect of documenting a piece of vanished swedish cultural history in our models. Thus several of the scenes along the tracks of our layout are reasonably exact replications of the landscape, buildings, etc. as they were in 1950.

All rolling stock and all buildings on the layout should follow these principles. However, it doesn't stop us from sometimes using a bit of creative freelance, but most of our models follow a specific swedish prototype.

It is more important that the model makes up a good portrait of the prototype than if every bolt, nut and washer is in the right place. However we make no compromises with the functionality! As we aim to run our railway both according to the time table and with unscheduled traffic, we need the tracks, the electric system and the engines to work flawlessly.