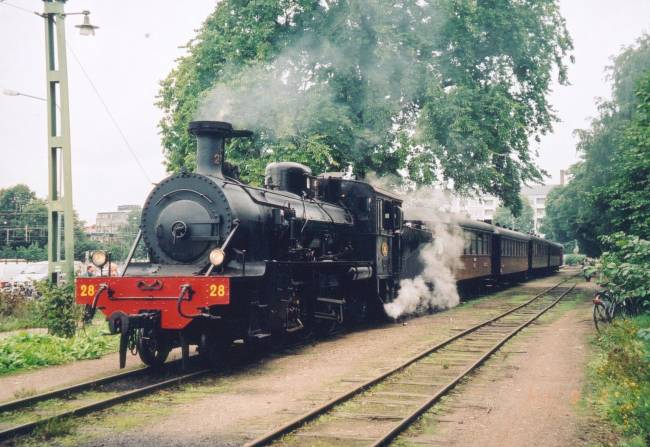 SRJ 28 ready to head a passenger train with old SRJ coaches out of Uppsala on the museum railway ULJ. Photo and © Per Nilsson.

The line from Uppsala to Faringe is preserved as a museum railway, Upsala - Lenna Jernväg, ULJ . It consists of the entire part of the original Uppsala-Länna Järnväg, ULJ, and an additional part of Länna-Norrtälje Järnväg, LNJ, to the former junction of Faringe were the line to Gimo and DHJ branched of. In Faringe the old engine shed with shops and turntable acts as the main engine service facility for the line.

At ULJ You still can ride passenger trains headed by the "Big German" SRJ no. 28 during the summer time. Most of the passenger cars and freight cars are original SRJ equipment, while SRJ 28 is the only steam engine from "Roslagsbanan".


Other steam engines that heads up the trains during the summer, come from Byvalla-Långshyttans Järnväg,  (BLJ): BLJ  4 "Långshyttan" and BLJ 5 "Thor". Motor cars and engines from the diesel age stem from SRJ and SJ (the Swedish State Railways).

During the summer of 2006, the trains operate on all Sundays from June 4th to September 3rd. Between July 6th and August 5th the trains are also in operation on Thursdays, Fridays and Saturdays.

To find out about timetables, days of operation and other information check on the ULJ web site ! 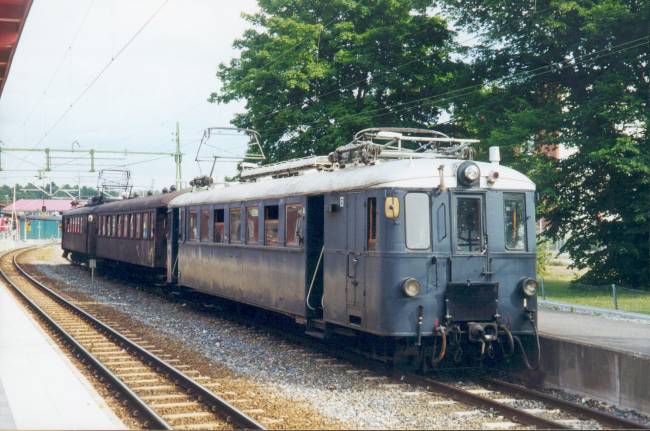 An excursion train made up by RBVs X4p 37, passenger coach Bp 880 and X3p 35 is waiting on the siding in Åkersberga. Photo and © Per Nilsson.

In order to preserve some of the older electrical rolling stock at Roslagsbanan when it were to be replaced in the early 1990ies,  Roslagsbanans Veterantågsförening, RBV was formed in 1992. Stockholm's Spårvägsmuseum (The Stockholm Tram Museum) own three older electrical motor cars and some passenger coaches, while RBV maintain them and operate the excursion trains. The oldest motor car dates back to 1919, and the "younger ones" are from 1934 and 1938.

During some days every summer You can ride old electric trains on the still active lines close to Stockholm. The trains are operated by employees of Roslagsbanan and the fare is the standard SL fare.

In the summer of 2006, it is not yet announced how and when the RBV train will operate the line from Stockholm Östra to Österskär or Vallentuna / Lindholmen. Check back in May / June for an update!

More information (presently only in swedish) is found at Roslagsbanans Veterantågsförenings web page .