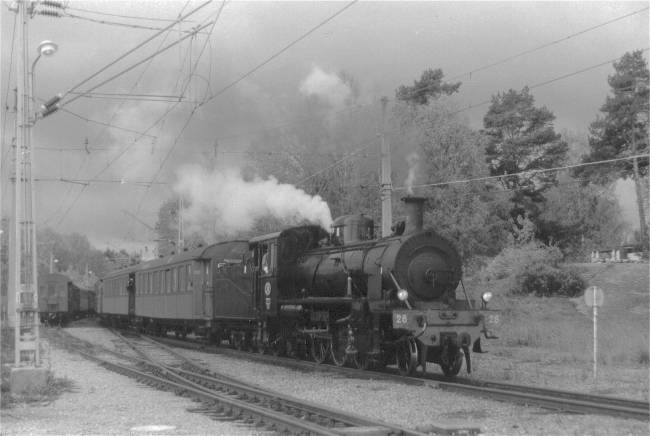 SRJ 28 - one of the "Big Germans" - heading an excursion train on its old main line between Stockholm Östra and Rimbo. Photo and © Per Nilsson.

SRJ was affected like all other private railway companies by the 1939 law requiring all railways to be nationalized. The Swedish State acquired SRJ and its daughter company DHJ in 1951. SRJ and DHJ  continued to run under their old names as state owned companies. In 1953 they were finally merged into one company - SRJ. Eventually SRJ was fully integrated into SJ in 1959.

At this time the decline of the network had started. The first line to be abandoned was Faringe - Gimo that was closed in 1960 (freight trains continued between Gimo and Alunda until 1970). Line after line in the north part of the network lost at least its passenger service until even the electrical line from Rimbo to Norrtälje was closed in 1969. Bus traffic was the name of the game in the 1960ies.

Most of the lines around Rimbo still maintained its freight service. Diesel ruled the lines after the last steam engines had lost regular passenger service in 1957 and the last regular freight train Hallstavik - Rimbo - Uppsala stopped using steam engines in 1960. A few "Big Germans" and some smaller tank engines were occasionally used in freight train service or shunting the big Rimbo yard until 1962, when all stem engines but SRJ 28 were scrapped.

On the electrical lines in the south passenger service kept growing, but the freight service was canceled in 1969.

The only exception to the negative trend up north was Dannemora -  Harg. The line still carried heavy traffic including iron ore trains. Thus it was converted to standard gauge in steps between 1960 and 1970. It was even extended in 1977 with new standard gauge track from Harg south to the big pulp mill in Hallstavik. This meant the death of the rest of the freight service on the 891 mm gauge in Roslagen. Shortly after 1977 all narrow gauge tracks north of Rimbo were torn up, only leaving 33 km between Uppsala and Faringe for a museum railway.

In 1967 the Stockholm county merged and organized all commuter traffic on trains, busses and underground into a new company called Stockholm Transport (Storstockholms Lokaltrafik, SL). At first SJ ran the trains on Roslagsbanan as a subcontractor for SL, but in 1971 SJ demanded a much higher compensation for the passenger service on Roslagsbanan or the lines would be closed! The only option to SL was then to make the electrical lines south of Rimbo a part of its organization from 1972, while SJ kept the freight service on the rest of the network.  From 1980  Roslagsbanan made up the railway division of SL as AB Storstockholms Lokaltrafiks Järnvägar, SLJ, together with Saltjöbanan - a standard gauged electrical railway south east of Stockholm.

In 1973 the underground connected to Roslagsbanan at Östra Station (underground station Tekniska Högskolan) which improved much for travelers to Stockholm city and beyond. No major changes were made to the train service in the beginning, except removing the last of "big railway luxury" in the trains - the toilets.

Instead plans were made up to replace Roslagsbanan with an extended underground line to Täby (a little further than the junction point in Roslags Näsby) and the rest of the network would be replaced by busses. These plans were confirmed by a county decision in 1975. This generated a lot of local opposition - the people loved their narrow gauge trains even if they were aging (with some motor units dating back to 1919 and a passenger coach to 1899).

Discussions went on for a number of years, while no investment was put into tracks and rolling stock. In 1979 a local referendum showed that a clear majority of the voters northeast of Stockholm wanted to keep and develop Roslagsbanan rather than replacing it with underground and buses. Now even the politicians turned around to support Roslagsbanan.

However, the first step was to abandon the most northern part between Rimbo and Kårsta. Service was stopped in 1981, and the tracks were removed in 1982. The grade has been saved though, enabling a potential retracking of the line. Also the line between Kårsta and Lindholmen did get its death sentence, but was saved due to the bad state of the roads were the replacing buses were to travel.

Finally in 1983 the county decided to keep Roslagsbanan as the main commuter carrier north east of Stockholm.  Investments should be made to upgrade the trains and expand the track capacity. A first step was to rebuild some passenger coaches into "control cars" from which the motor cars could be controlled when going in the opposite direction. This way the time for running around the rest of the train at the respective terminals could be saved. From 1984 the normal consist became either three units (Motor car, passenger coach and "control car") or five units (with motor car in the middle and one "control car" at each end). This way the traffic density and total capacity could be increased.

During 1984 a decision was also made to completely replace all rolling stock with new (blue) electric motor cars, passenger coaches and "control cars". The first blue passenger coaches were delivered in 1988 and the first complete train in 1990. Deliveries continued until 1995 when the last of the old "green" rolling stock could be retired. During the early years in the 90ies the rolling stock was a very amusing mix of old and new.

Today, most of the original network is abandoned, but 65 km of the electric lines to the suburbs close to Stockholm remain, and still carry about 25 000 passengers a day in the modern narrow gauge trains.

Historic SRJ can still be found on the line from Uppsala to Faringe which is preserved as a museum railway, Upsala - Lenna Jernväg, ULJ. On the still active lines close to Stockholm You can ride old electric trains preserved by Roslagsbanans Veterantågsförening during the summer.