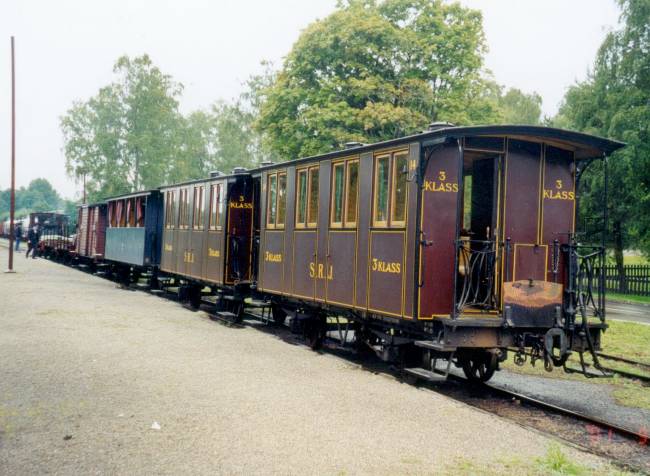 Some of the very first four wheel open platform passenger coaches of SRJ - built 1885 - are still in operation at the preserved line ULJ. Photo and © Per Nilsson.

Roslagsbanan, or Stockholm-Roslagens Järnvägar  (SRJ) ,was one of the largest narrow gauge railway networks in Sweden. It later expanded into a 327 km big three foot (891 mm) empire north of Stockholm. It also included Dannemora - Hargs Järnväg, DHJ, in the north of the province Uppland. See maps!

The first line to be opened of what later would become Stockholm-Roslagens Järnvägar was Uppsala-Länna Järnväg, ULJ. From 1876 it connected Länna and its ironworks with blast-furnance with the university town of Uppsala were the 20,5 km long line met the standard gauge line of SJ.

The next line to be opened (in 1878) was also created to support the iron industry. Dannemora-Hargs Järnväg, DHJ, connected the big open iron mine in Dannemora with the ironworks in Gimo and the deep water harbour in Harg, totally 39 km. Timber became a good source of revenue in addition to the iron ore, charcoal and iron products, but passenger traffic was scarce, in the beginning only one train in each direction on weekdays, none on Sundays!

By 1884 the Uppsala-Länna line was extended with a new railway - Länna-Norrtälje Järnväg, LNJ. This 60 km long line connected the town of Norrtälje, situated at a well protected harbor in the middle of the Roslagen coast line, with Uppsala and the rest of the swedish railway network. ULJ and LNJ immediately started to co-operate with one through passenger train a day in each direction between Uppsala and Norrtälje. The first time table of 3 hours 40 minutes for a one way trip, was soon extended to 4 hours and 18 minutes for the 80 km!!!

By 1885 it was time to open the 55 km of Stockholm - Rimbo Järnväg, SRJ, which was to become the mainline of Roslagsbanan. It connected Stockholm with the rich country side north of the capital, and with Rimbo - the junction with Länna-Norrtälje Järnväg. This created a three foot connection between Stockholm and Uppsala respective Stockholm and Norrtälje.

Except for acting as a supply line for Stockholm, feeding the city with agricultural products and wood, SRJ carried a fairly high number of passengers. The first narrow gauge commuter line north of Stockholm was born.

Additional commuter traffic was added when Djursholmsbanan, DjB, was opened in 1890. Djursholm expanded as a popular new area where the prosperous people could build their own houses at big lots in the "Garden Village". With Djursholmsbanan they could commute to and from the city. However, the little train did pollute the "Garden Village", and soon plans were made to convert the line to electric operation...